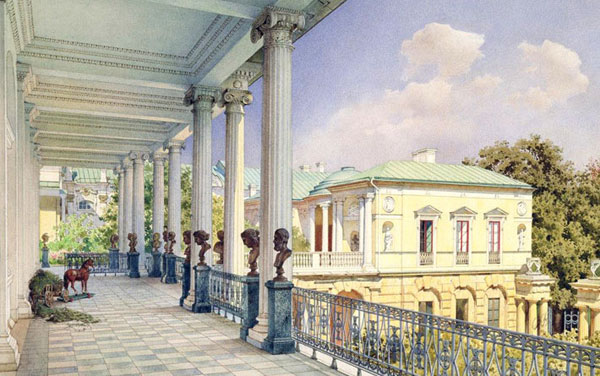 Charles Cameron, the outstanding architect of XVIII century, the creator of Pavlovsk palatial and garden ensemble, famous Halls of Tsarskoye Selo, Gallery and Agate Rooms, the favorite architect of Catherine II, was a man of unusual fate.

His arrival to Russia in 1779 and further work as a court architect of the Empress had a great influence on Russian architecture and interior design. Charles Cameron’s biography is a ready adventure novel plot. For a long time experts believed that he belonged to an ancient Scottish clan, the Camerons, and was the son of Ewen Cameron, a famous Scottish leader during the rebellion against ruling Hanoverian House on the side of Stuarts in 1745—1746.

However later it was found out that actually Charles Cameron was born in mid-1740s and his family was far from nobility, though they were fairly well off. His farther, a building contractor, sent his son to the Carpenters’ Guild and hoped that he would continue the family business.

However Charles chose another life path. His career was breathtaking: from a half-educated carpenter he shortly became a steel-cutter, than a highly professional graphic artist, and, finally, a famous architecture researcher. The meeting with Isaac Vear, the outstanding architect and builder of mid-XVIII century, changed young Cameron’s life. Vear, who was taking great interest in the art of late Renaissance, engaged Cameron to make drawings for his book about Roman thermae.

After the death of his teacher in 1766 Cameron decided to continue to work on the publication alone. He went to Italy to measure the thermae trying to grasp the details and composition of ancient art. After the return Charles Cameron, inspired by high hopes, prepared the publication of Roman Thermae. The work was published in 1772 n two languages, English and French, as a huge illustrated deluxe edition got up with magnificence and even some pompousness. The book was sold in London and Paris. 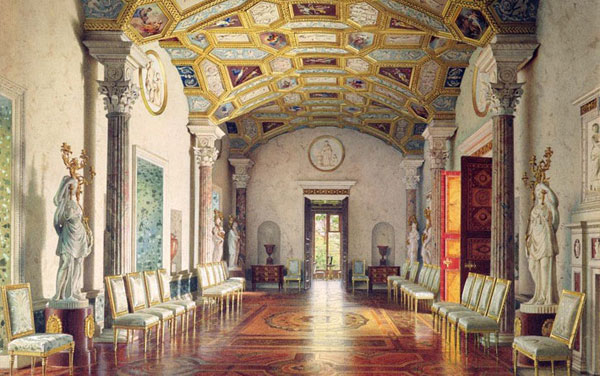 In 1774 and 1775 subsequent reprints were published. Cameron’s treatise was an unexpected discovery for Russia, an excellent example of deep literary, scientific, philosophical, and historic research of architecture related issues.

In 1779 Catherine the Great, an admirer of antiquity, invited Charles Cameron to create “…a project of antique house planned like in ancient times” in Tsarskoye Selo. In her letters to friends the Empress often enthusiastically mentions her impressions of the meetings with the master: “Now I take great interest in master Cameron, an architect… A great graphic artist. It is an intellect, intellect inspiring imagination”.

At the moment of arrival to Russia Cameron did not account for any famous buildings, but following decades demonstrated amazing power of his creative potential. He was energetic and ambitious, knew Italian, French, English, and, of course, ancient Greek and Latin. He was interested in history and natural sciences, especially astronomy and mathematics. He brought a new style to Russia – ascetic and light classicism. He was first to prove viability of antique art principles in modern conditions.

In fact, Cameron was the architect of two ensembles – Tsarskoye Selo and Pavlovsk. At first, he was commissioned to make new interior for several halls of the Palace in Tsarskoye Selo changing uneasy Rastrelli’s decoration to more austere one, such as Cameron had seen on the ruins of ancient Rome. All who had access to the palace went to see the newly decorated halls long before their official opening. 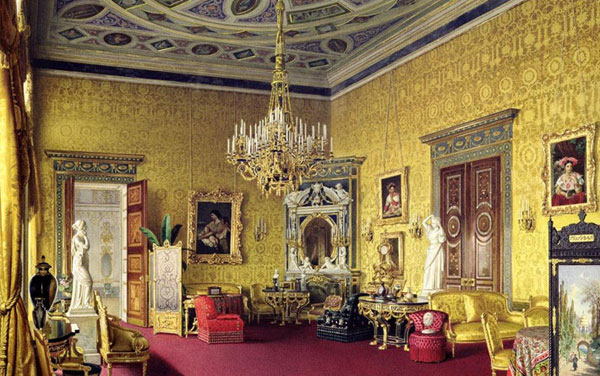 The customer, Empress Catherine II, was happy too. He admired the Lion drawing room, the walls of which were padded with Lion silk; the Arabesque room decorated with picturesque ornamental patters; a bedroom with thin glass columns; a suit, jokingly called the “snuffbox” because Cameron decorated all walls with white and blue glass and fastened them above with gilded bronze palmettes, like a jeweled snuffbox.

At the same time Cameron, at the royal request, started the project of Pavlovsk. “Everything in Pavlovsk came alive and was inspired when Cameron came there,” – contemporaries wrote. It was no surprise. Charles Cameron brought the composition of English landscape park with him from England. Skillfully using huge spaces and various peculiarities of the landscape he created mesmerizing landscape panoramas in place of wild forest and bushes.

The Temple of Friendship, simple, but full of solemn beauty, appeared on the bank of Slavyanka river. Everything here disposes to quiet rest, reading, and meditation. The surrounding park is so poetic, and the Temple of Friendship with its massive columns lures to its cool shadow. Every visitor feels drawn to it. It is impossible to forget or confuse with any other pavilion. Later the Temple inspired many architects for beautiful architectural solutions.

Other pavilion, Voltaire (or poultry-house), is not just a cage or farm poultry house, but a classic pavilion with colonnades and a beautiful hall in the middle full of mirrors, soft sofas, and flowers. It was joined from one side by a gallery with ancient urns and from the other – a room for singing birds, as a symbol of life.

The architectural projects of Cameron were different from those of other architects by their content. Each of them presented either elegant poetic metaphor or some meaning. And the last, but not the least, we have his greatest work, a project of his dream – thermae in Tsarskoye Selo. 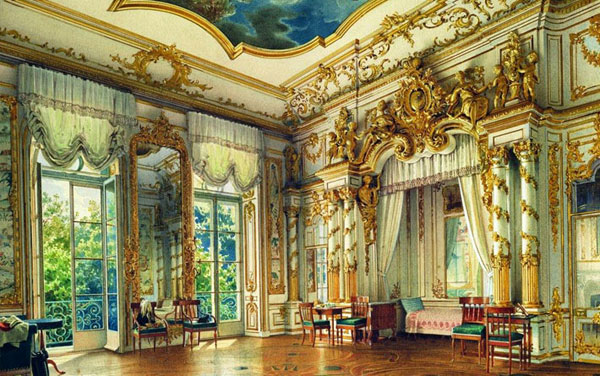 He brought into reality everything he had admired while researching ancient thermae in Rome. In the so-called Agate Rooms he places warm and cold baths with rest and massage rooms at the first floor and study and conversation halls and a library at the second floor. The Agate Rooms were connected to the palace with a hanging garden blooming at the height of the second floor. The garden was joined by a large gallery, later named after Cameron, where visitors could watch festive illuminations and promenades in the garden and on the lake if the weather of nice or walk inside the glassed-in park in windy and rainy days.

The guests could walk from the gallery by a beautiful stairs or by a “ramp” – a straight slope without steps decorated with sculptures. It was the realized dream of the architect. In the early 1790-s he developed the thermae complex: created the ramp leading to the Agate Rooms, designed the second gallery, the Temple of Memory, devoted to Russian-Turkish wars, which was to be constructed in front of the ramp and meet people moving from Gatchinskie Gates with a triumphal arc. In 1795 the architect designed a little house church in the back of Agate Rooms. Later it was constructed but with significant changes in design. In 1803 Cameron was appointed the Architect of Admiralty.

The master worked on the projects of such large buildings as St. Andrew’s Cathedral in Kronshtadt or new development of the Galernya Bay area on Vasilievsky Island. Charles Cameron died in St. Petersburg in 1811, not long before the war with Napoleon. Charles Cameron, a thinker, ancient architecture researcher, master of architectural and landscape design, graphic artists, and etcher, has become one of the guides to the Age of Enlightenment for Russia, the age marked by the ideas of individual moral development and sincere desire for harmony of people and surrounding environment.